RSS
← The effects of a slow global recovery on Europe and Africa, by Chofor Che, published at Africanliberty.org, 24 July 2012
285,000 Solar Acres—and More →

Should You Trust the Government? By Nick Hodge, Editor of Energy & Capital and Investment Director of the thousands-strong stock advisory, Early Advantage, written on Wednesday, 18 July 2012

You really think the president of the United States of America has power?

Better yet, you think he ever wants what’s in your best interest?

The banks that manipulated the rate stole billions from anyone who is charged interest.

They stole from you.

Where was your president?

Where was your government?

This week we learned (though the news was suppressed quickly) that HSBC (NYSE: HBC) allowed terrorists and drug cartels to launder money through its bank.

HSBC is a major Wall Street player. It has a market cap over $150 billion.

Drugs are illegal for you and me… Terrorism is certainly illegal…

If you were to smoke a joint while standing on Wall Street — or stood there shouting “terroristy” things — you would undoubtedly be quickly arrested, the book thrown at you.

But a major international bank can launder billions of dollars of money that stems from terrorist and drug operations unnoticed.

Where were the police?

Where was the president?

Where was your government?

It’s the Wild West out there.

Corporations and those who run them do whatever they want until they’re caught… and then they settle or plea.

Bernie Madoff’s Ponzi scheme… Anthony Mozilo’s massive Countrywide fraud… Raj Rajaratnam and Rajat Gupta of Goldman Sachs insider trading… I could go on and on and on.

The case of Anthony Mozilo is particularly poignant.

He made hundreds of millions of dollars manipulating Countrywide’s share price. He saw the mortgage crisis coming, said everything was fine, dumped his shares, and used shareholder funds to buy back shares to support the stock price.

Any way you slice it, that’s effed up.

The housing market collapsed. Trillions of dollars of American wealth were erased. Millions of people have foreclosed or are underwater.

And while he was doing it, Mr. Mozilo was offering reductions in mortgage payments and mortgages with below-market rates to Senators and CEOs of government-affiliated organizations like Fannie Mae.

What happened to Anthony?

He settled with the SEC for $67.5 million, of which $20 was paid by Countrywide because of an indemnification agreement in his contract. And he kept the rest.

Where was George W. Bush when all this was being orchestrated?

Where was your government? (It was taking bribes from Countrywide, that’s where.)

Where’s the fulfillment of Mr. Obama’s promise to clean it up?

When’s the last time you can recall a politician fulfilling a majority of his campaign promises?

Have the greatest advances in your life come from self-directed activities or from government activities?

I can tell you it’s all self-directed for me.

And has the plight of our nation gotten any better since, oh, I don’t know, the Korean War?

We’re dependent on foreign oil; we have over 45 million people on food stamps; we fight constant years-long trillion-dollar wars; our national debt’s through the roof; we have an adolescent prescription pill epidemic; Social Security’s unsustainable and running out; and Americans have lost 40% of their wealth with the middle class taking the hardest hit.

But you know who’s fine?

The class of the Wall Street/Washington revolving door and the payola and mutual back-scratching that comes with it. I can just picture them laughing at us watching reality TV and arguing over school prayer… 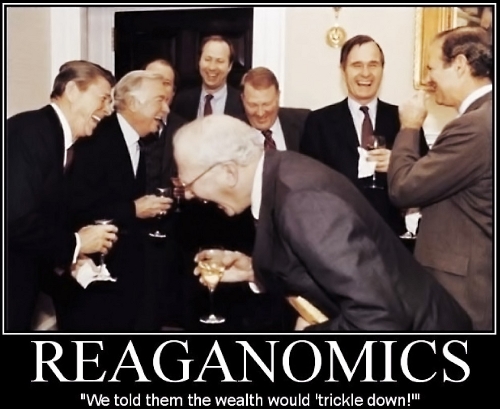 That’s why I have to laugh when someone asks or makes predictions about what the market will do based on who’s elected. Because at the end of the day, it doesn’t matter.

Obama won the Nobel Peace Prize and now has a Kill List and rains down hellfire missiles from Predator drones.

He was supposed to be a staunch clean energy proponent and we’ve seen that sector fall up to 80% amid numerous bankruptcies.

Both sides work for the highest bidder.

There’s a reason Donald Trump’s millions in political donations have gone 54% to Democrats. And there’s a reason he was donating to Rahm Emanuel’s (Obama’s former Chief of Staff) Chicago mayoral run while at the same time claiming Obama is foreign-born.

There’s a reason the billionaire Koch brothers are funding the Tea Party’s quest to fight for the little man.

It’s not about the little man for either side. It hasn’t been for some time now.

Rely on Yourself, Rely on Truth

We’re all libertarians; some of us just embrace it more than others.

We all want and enjoy individual liberty and freedom. But many of us have fallen victim to the two-party system…

You’ve been intentionally misled by both parties.

It’s time to throw all that stuff out the window. It’s time to make your independent self successful — no matter who’s in office.

The needs of a rapidly growing world population (food, water, energy). The effects of an aging baby boomer population. The growing ubiquity of technology and Internet. The inevitability of a coming to Jesus with respect to fiat currencies, money printing, and public debt.

The way to make real money is the same as the road to true independence: Rely on yourself and don’t bet on sides.

Nick is an editor of Energy & Capital and the Investment Director of the thousands-strong stock advisory, Early Advantage. Co-author of the best-selling book Investing in Renewable Energy: Making Money on Green Chip Stocks, his insights have been shared on news programs and in magazines and newspapers around the world. For more on Nick, take a look at his editor’s page.

Posted by choforche on July 25, 2012 in Uncategorized

← The effects of a slow global recovery on Europe and Africa, by Chofor Che, published at Africanliberty.org, 24 July 2012
285,000 Solar Acres—and More →